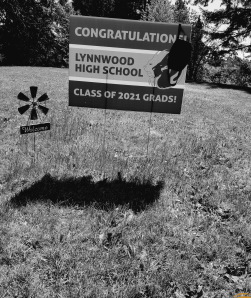 This photo taken outside the Laughlin residence and is a photo of a sign showing support for seniors of 2021 with a mask on the sign symbolizing the aspect of the ongoing pandemic which has affected all students and staff members of LHS and around the world.

​IN PERSON SCHOOLING: THE RIGHT MOVE OR A STEP IN THE WRONG DIRECTION?
SEAMUS LAUGHLIN, STAFF WRITER
POSTED MAY 22, 2021

Recently our school district has adapted a new hybridized way of teaching students both online and in-person and despite still being in its early stages many people ( both students and teachers ) have been left with several different questions,opinions,and overall emotions in regards to this new step towards having society piece by piece return to how it was before the pandemic.

From my perspective, as someone who is opting to stay online, despite the fact that I myself am not in-person I can still personally see the benefits that it has had on students who've really needed the one-on-one teaching/social interaction aspect of being in a public setting such as school, even with the obvious limitations. As a personal example, I’ve seen at least one or two of my teachers not have to have a lecture on the amount of students that haven’t been turning in assignments nor have I noticed absences being a major topic of discussion and although these two examples might not seem like primary benefits they still are benefits nonetheless, which displays how even in the short amount of time we’ve been doing this new schedule ( roughly a week and a half ) there still is noticeable improvements ( no matter how minor they may seem ) over schooling online. However I must admit, in some sense the long zoom hours definitely does get to me at times ( in terms of mentally wearing me down ) and I find myself once in a while not feeling the need or desire to read as much or get as much work done as I used to before.

During my various interviews with different students and teachers ( in order to get the thoughts and opinions of both parties being affected ), I received an extensive amount of significant inputs about several factors to consider when talking about this new scheduling/format. When asked about how they have seen their students be affected by this new format, Mrs Gundeson stated “Many students who were not engaged prior to this new schedule are now legitimately trying to improve themselves, although quite a few individuals have made it work for online schooling the majority really need in-peron schooling to be engaged”. Meanwhile Mrs Villalobos commented “I’ve seen positive effects on the interaction of students, with the online format it’s just harder to get students to participate and although this new schedule is challenging it’s still overall better for the students from my perspective”.

Meanwhile when I interviewed students about how they have been affected by the new schedule/format, Aidan Laughlin ( a student attending school online ) stated “I’ve become very tired nowadays and have less of a mental drive to get work done” along with “It reminds me of prison because I don’t get to move much and am very tired”.

So based on these contrasting interviews and opinions, the conclusion can be made that whether or not this schedule is viewed as ideal or not does not factor into the fact that this schedule is able to evoke emotions out of individuals regardless, whether those emotions are positive or negative. 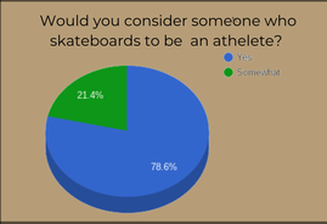 Arguably, the most popular items in the youthful demographic would have to be the skateboard, with its roots in adolescent culture; along with its impact on helping to form various different subcultures throughout the past few generations. It has come to be defined as quite a noticeable fitness-related object. However, the question this article aims to tackle is whether or not skateboarding can be defined as a sport to society, given the parameters of what defines a sport or a hobby or perhaps even an athletic performance art form in the same vein as dancing.

​To give a brief synopsis of the history of skateboarding in the United States: Surfing was the original source/inspiration for skateboarding as surfers in the early 1950’s came up with the idea of transferring the feeling of surfing to solid ground. When the season or environmental factors kept them from surfing in water, these individuals were called “asphalt surfers”, when asked about the similarities between skateboarding and surfing, interviewees stated, “Both stereotypes have similar personalities” says Aidan Laughlin a Freshman at Lynnwood Highschool. Another student at Lynnwood Highschool, Tara Laughlin a Junior at Hillcrest highschool in Riverside, California states, “Mostly involve the same movements, both require a good amount of balance, and both involve using the same mechanisms of the human anatomy”. The first skateboards were developed in Hawaii and California state. Skateboarding first peaked in the late 1950’s during the post-war period with the first official skateboards being released by Roller Derby in 1959. Skateboarding increased in popularity in the passing years and decades, with companies like Vans which was established in 1966,Thrasher Magazine established in 1981, Powell Peralta established in 1978, and Santa Cruz established in 1973. These major companies were centered around skateboarding that were founded since skateboardings inception. The board itself has also gone through several modifications over the years with Larry Stevenson developing the “kicktail” in 1969 which is the bent parts of the skateboard in the front and back which allow for skateboarders to hop off the ground and pull off various different tricks more optimally. Frank Nasworthy invented the urethane wheels in 1972 which can withstand a much higher loading capacity compared to rubber wheels or steel wheels and have the ability to withstand extreme weather conditions, and overall the shortening of the deck on the board allows for more suitable riding and maneuverability. Other significant events in the annals of skateboards history include: The first artificially created skate-park in 1976, the first skateboarding contest held in Hermosa Beach, California in 1963, along with Alan Gelfand inventing the “ollie” in 1978, and X Games which if you are not familiar with, is an annual extreme sports event particularly including skateboarding that is held annually by ESPN, introduced in 1995. 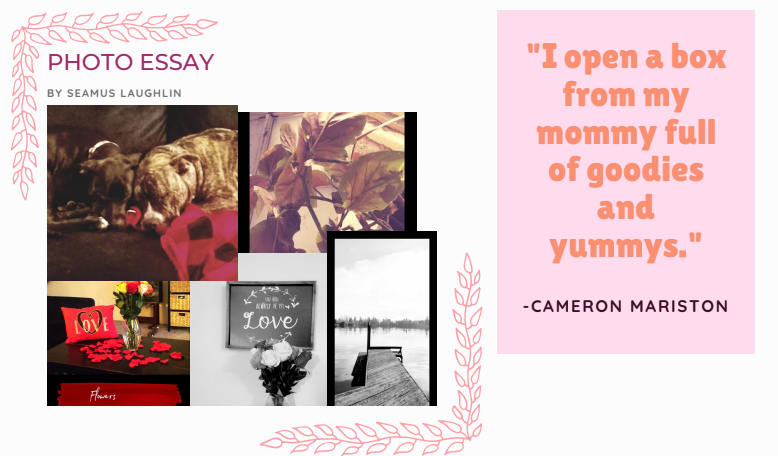 This is a picture, taken by Seamus Laughlin, of the sun setting in Martha Lake on January 22nd, 2021. This scenery is often associated with what Valentine’s Day should look like (red/orange colors), and the springtime, when the sun starts to come out more and there are more sunsets and sunrises.
​

Valentine’s Day is one of the most widely celebrated holidays. The concept of it is just to love one another, whether it is a significant other or just a friend. Valentine’s Day is an important holiday for most people. People go out and hang out, give out candy, and of course, are kind to one another. Although not all countries celebrate it, (only 16 countries, statistically, do), the message and meaning of Valentine’s Day to people still hasn’t changed. Even during the Covid-19 Pandemic. According to Angelo Studioso, “You can Celebrate Valentine's Day with anyone special to you.” Valentine’s Day is celebrated annually on February 14. It originated as a Western Christian feast day honoring an early Christian martyr named Saint Valentine. It is recognized as a significant cultural, religious, and commercial celebration of romance and love in many regions of the world. Take the Latin culture for example. In most Latin American countries, Saint Valentine's Day is known as El Dia del Amor y la Amistad. ​

(Day of Love and Friendship). In the US, approximately 190 million valentines are sent each year. Half of those valentines are given to family members other than husband or wife, usually to children. In a poll survey, 52% of people in the US plan to celebrate Valentine’s day in 2021. Of the 52%, most of them plan to spend it with their families. “I spend it with my mom, and I go out to dinner with my family,” says Jennifer Torres when asked about what she does to celebrate Valentine’s day. And for some people, the candy is the best part! “I open a box from my mom full of goodies and yummies," says Cameron Mariston. Although the COVID-19 pandemic has kept us inside and away from others for almost the past year, that doesn’t stop us from being able to care for one another, especially on a day like Valentine’s Day.